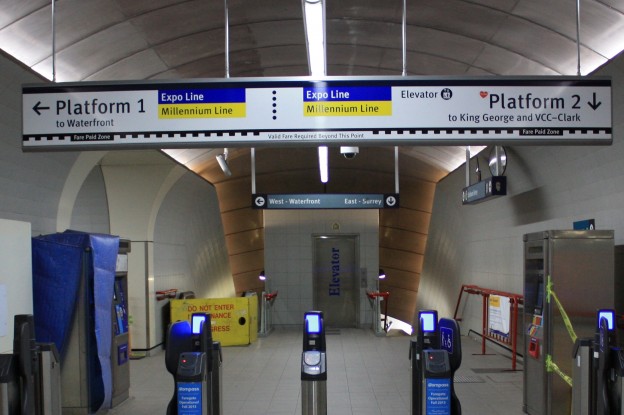 I was going through some of my photos and came across a set where I was comparing old and new signage on the SkyTrain.  Below is one example from Granville Station.  You can see the new sign in the foreground, with the existing sign further back.  What struck me is how complex the information is on the new sign.

I remembered reading the following guideline some months ago from an old New York City Transit Authority Graphics Standards Manual circa 1970.

The subway rider should be given only information at the point of decision.  Never before.  Never after.

After that, at the intersection where the old sign is, the rider can be shown information on the different platforms and destinations.  However, it would make more sense to me to emphasize the direction of travel, and the destination instead of the platform number, especially since most stations only have two platforms.  Platform numbers are only be useful for people following a trip plan, or if there are two or more lines at a station; they aren’t really useful in any other circumstance.

The effect of giving people information too early can also be seen on the signage at Burrard Station, depicted below.

The guideline in the old NYCTA Graphic Standards manual makes a lot of sense to me now.  Putting relevant information only at the decision point makes signs less cluttered with information.

One thought on “Comments on the new signage at SkyTrain stations”