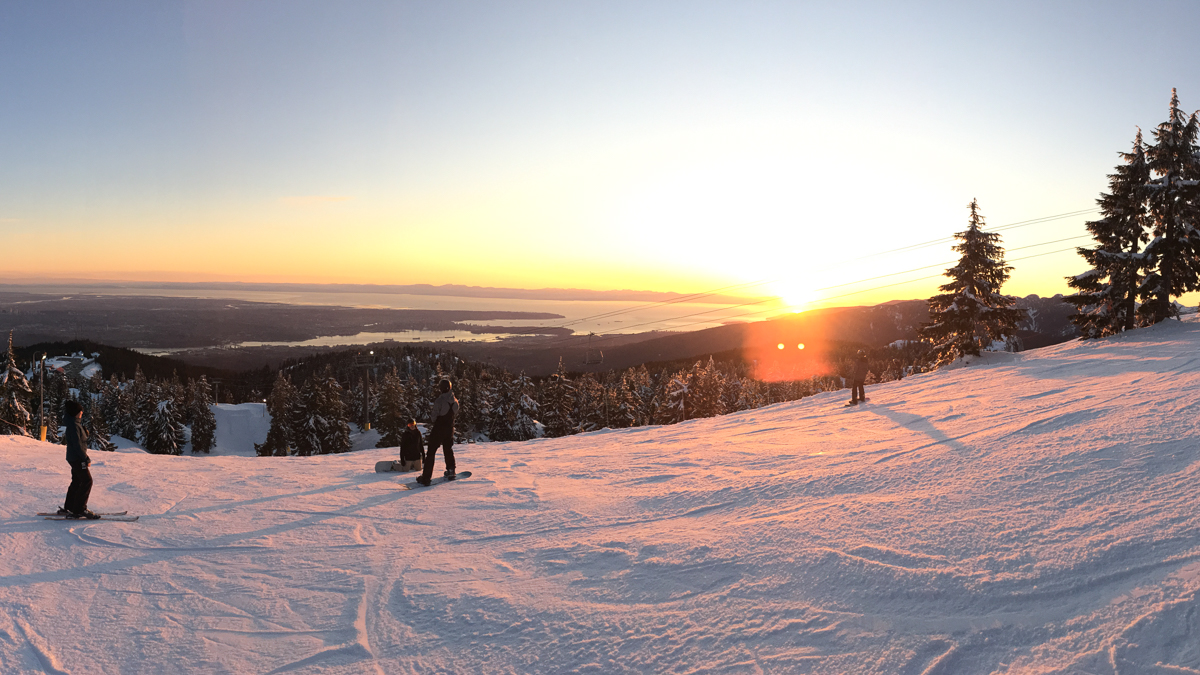 Mount Seymour was the mountain on which I first learned to ski back in my elementary school days. Back then, the Goldie learning area had a rope tow (I remember burning my gloves not holding on tight enough), and the original Mystery Peak twin chairlift took a grueling ten minutes or so to get you back up the mountain (although that meant reasonable rest time for those with lower endurance). Nowadays, the Mystery Peak Quad Express whisks people back up the mountain in half the time, and learners in Goldie get an easy-to-use magic carpet.

The general sentiment of Mount Seymour is that it’s small, friendly, and great value.

At 200 skiable acres, it’s the smallest of the three North Shore mountains, just a tad smaller than Grouse Mountain. I mostly skied on weekends in the late afternoon and evenings so I personally didn’t encounter frequent issues with road traffic, parking lot space, or extraordinarily long lift queues.

The Goldie area is fine for first timers and absolute beginners being flat, wide, and short. However, once basic skills have been mastered, one has to make the choice between Manning run on Mystery Peak which has some narrow portions near the top, or the Lodge area which is nice and wide but has some steeper portions near the top and bottom.

The Mystery Peak area contains the long main runs, Manning (beginner) and Northlands (intermediate) and many offshoot trails that provide some variety. There are also some drops for expert skiers/snowboarders, plus the Unicorn run connecting Northlands to the bottom of the Lodge area, which is actually a fun run closer to a blue-black when there’s fresh snow, if you can master the steep pitch at the top.

The Lodge area provides a moderate slope, nice and wide, relatively short. I find it a good area for practicing skills. Be warned though, on weekend afternoons, you could be stuck at the bottom waiting a long time in the queue for the non-express twin chair back up.

The Brockton area is open only during the daytime and provides a bit more off-piste experience for more intermediate/advanced people, although there are some groomed runs. It’s a reasonable area to play around in if the queues are long at the other lifts, but it’s a pretty small area so it might get boring quick.

Also, if you are interested in terrain parks, Mount Seymour has the largest setup out of the three North Shore Mountains. I don’t do those terrain park tricks, so I can’t give any review of that.

Out of the three North Shore mountains, I’ve encountered the friendliest and most human staff at Mount Seymour (at some other mountains, the staff seem like robots).

The season pass at Mount Seymour is probably the best value out of the local mountains. In the spring of 2018 when I picked up skiing again, I bought a 2018-2019 season pass which also allowed me spring 2018 skiing for $359 + tax. In addition, I was able to use the enhanced reciprocal deals to ski free for two days each at Manning Park and Apex Mountain which saved me about $300 on my little skiing road trip (they also have free reciprocal days at Mt. Washington, and new for the 2019-2020 season Baldy Mountain and Silver Star).