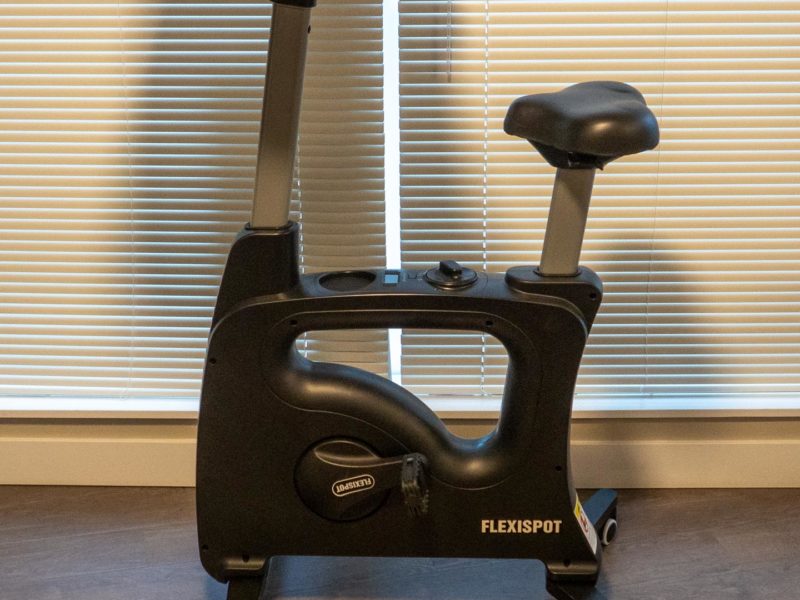 I have been working primarily from home since the COVID-19 pandemic hit in March 2020, and with our company moving to remote-first work permanently since last year, I’ve been looking for ways to improve my quality of life in my work-from-home environment. Check out the #wfh tag for posts about my other work-from-home equipment.

One of the issues with working from home is less opportunities for physical activity: I used to easily complete my 10k steps a day when I needed to work at the office. However, with my office only 15 steps away, this is much harder to complete nowadays.

After looking at various exercise options, I decided to go for the Flexispot v9 Desk Bike. I admit it’s a pretty expensive option for an exercise bike as it , but with a Black Friday discount and using my fitness reimbursement benefit from work, the price I ended up spending was pretty reasonable.

END_OF_DOCUMENT_TOKEN_TO_BE_REPLACED

Yesterday I fell into a very simple but dangerous SQL trap.  Can you identify it?

The proper way of checking for null is by using the IS NULL or IS NOT NULL predicates. The correct SQL query would have been as follows:

So if you’re used to languages where you check for null with equal signs, remember that in SQL, you must use the special IS NULL or IS NOT NULL predicates instead of the equals sign or other comparison operators. Don’t get tripped up like I did.

If you want to read more about, Wikipedia has a detailed article on null in SQL.

This past week, the co-op students at A Thinking Ape participated in an internal hackathon where they had two days to develop something to show the rest of the company.

Among the games and tools that resulted, one project stood out to me: a hello world app.  Yes, a hello world app. (For those not in the software development field, “hello world” is usually the first output that developers code when trying out a new platform or language.)

It had a white background, black text that said “Hello World,” and a green button that was labeled, “I am a button.”  It was built using Microsoft’s latest platform that supports writing universal Windows apps that can be run on Windows phones, tablets, and desktop computers.

What stood out to me was the way he presented this simple app.  He described the app not as any other hello world app, but one with a button and that it was green!  As he went on, he told us that the green button was also “self aware,” because it was labeled describing itself as a button.

Then he went on to clicking the button.  The text that appeared below said, “You clicked the button, ” or something to that effect.  He described this like predicting the future, but in reverse!

He finally proceeded to show us that how it looked on a phone simulator.

By the end of it, many of us were quite entertained by the way this seemingly simple and ordinary project was described.  This presentation reminded me of the  “reality distortion field” Steve Jobs had when he presented his keynotes (here’s one when Steve Jobs revealed Safari for Windows in 2007).

This example is to show that no matter what kind of product you have, the way you present it to people and the way you market it has a great effect on what the audience will feel and remember about the product.

It’s a little known fact that Microsoft Word by default does not spell check uppercase words.  I had the opportunity to read through many co-op resumes from a couple universities this past week, and the typos I’ve seen seem to support this observation.

The problem comes when you have a section heading in capitals, such as “ACHIVEMENTS” or “RELEVENT SKILLS”.  Microsoft Word by default doesn’t indicate that the spelling is wrong!

I’m not sure why this “feature” is enabled by default, as I’d think it would be better to have more false positives than to have typos go undetected.  In any case, it’s easy to get Word to spell check uppercase words, which I’ll outline below.

More importantly it’s essential to manually proofread your job applications.  Having typos (among other things) shows a lack of attention to detail.  Don’t rely on an automated spell check. 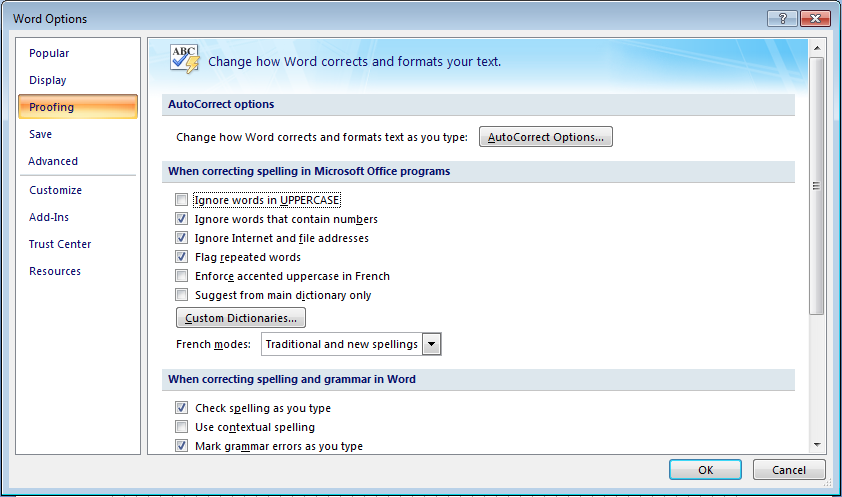 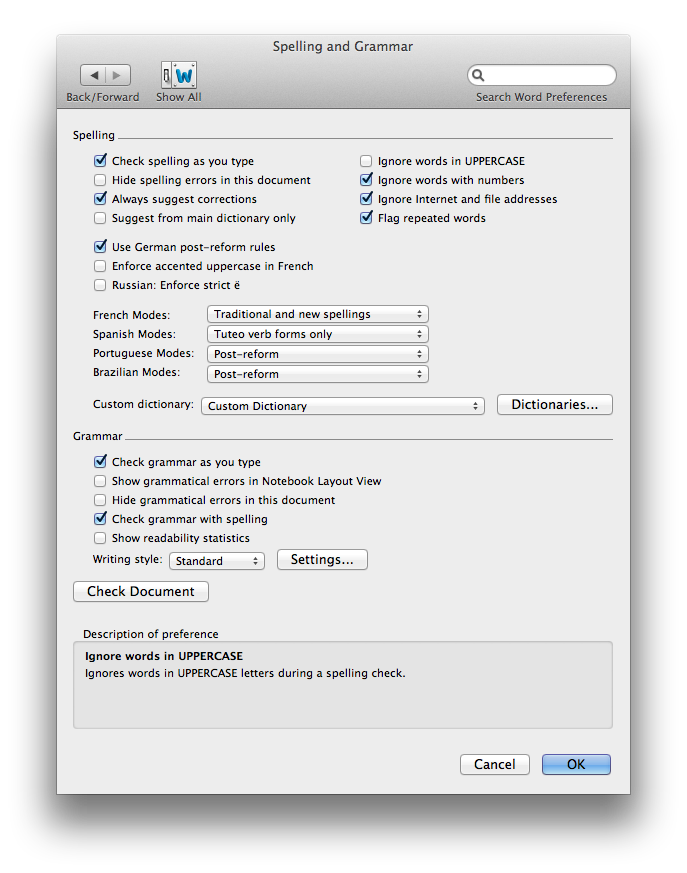 Have you got other related tips and tricks to Microsoft Words, or resume writing?  Share yours in the comments. 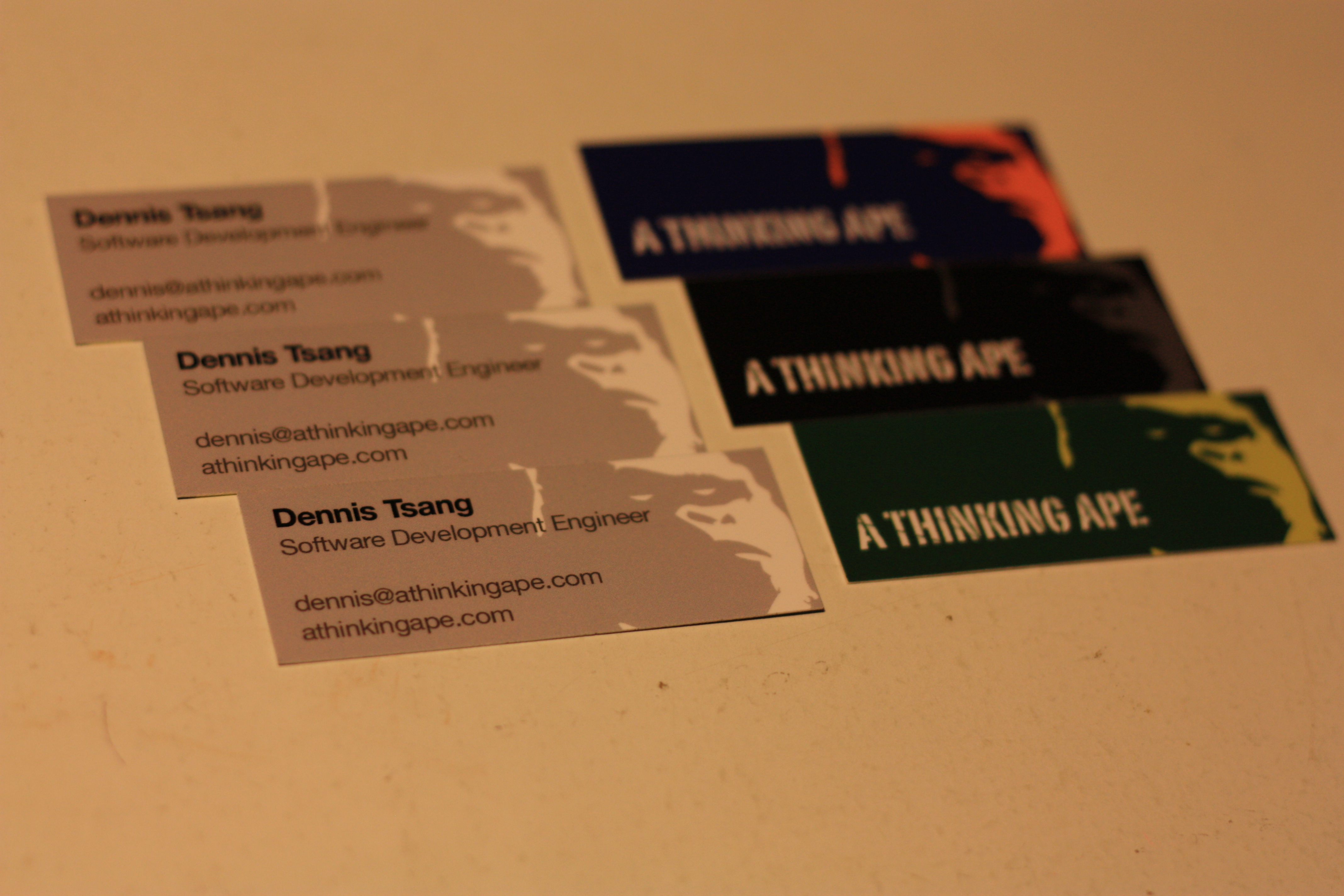 On Thursday, I found this on my desk after lunch. 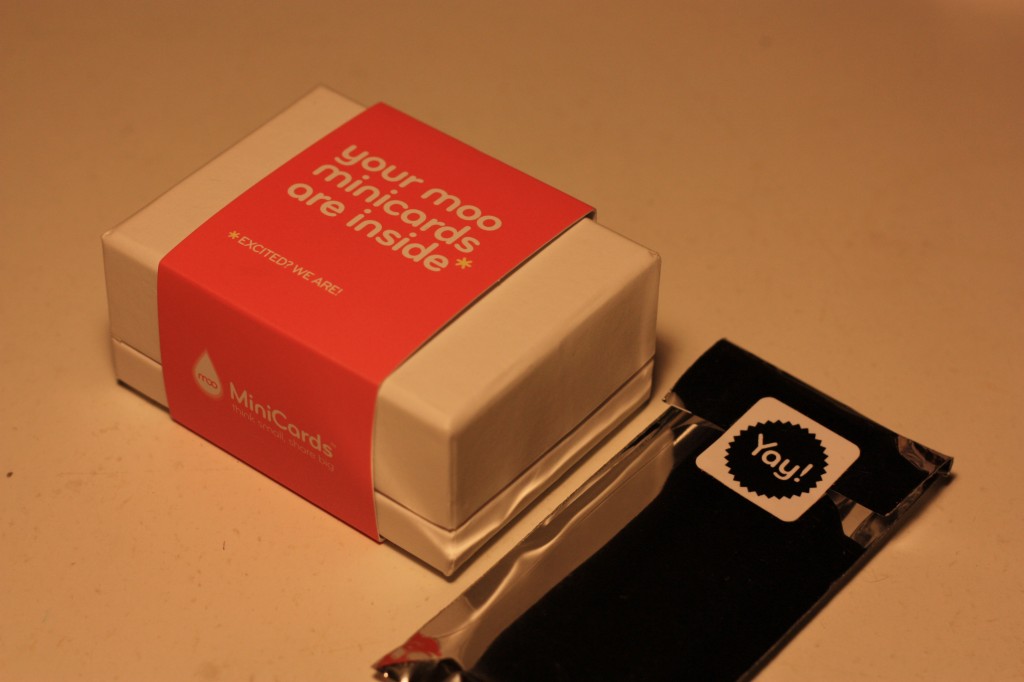 Excited, I was!  Yay!  My first professional business cards! 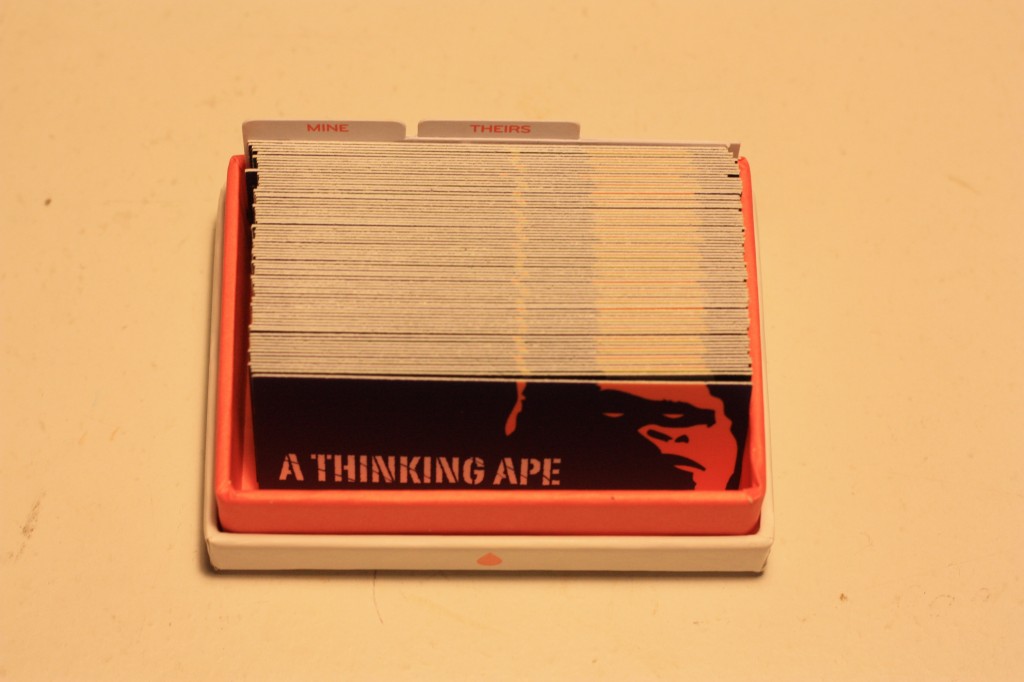 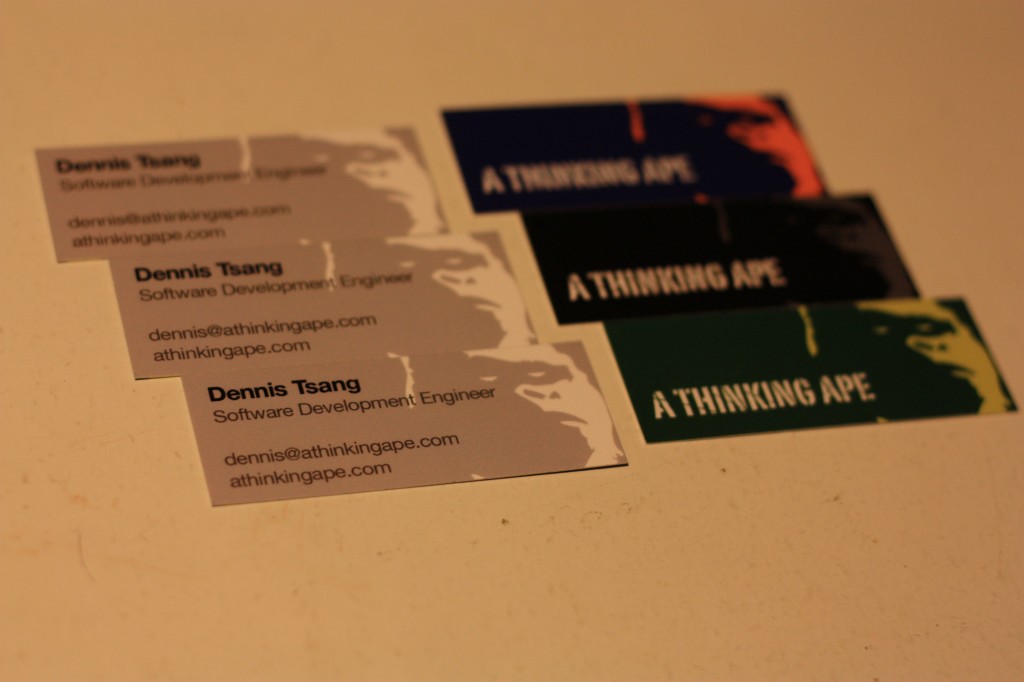 3 different coloured cards.  Green, blue and black.  I probably should have picked some more vibrant colours… 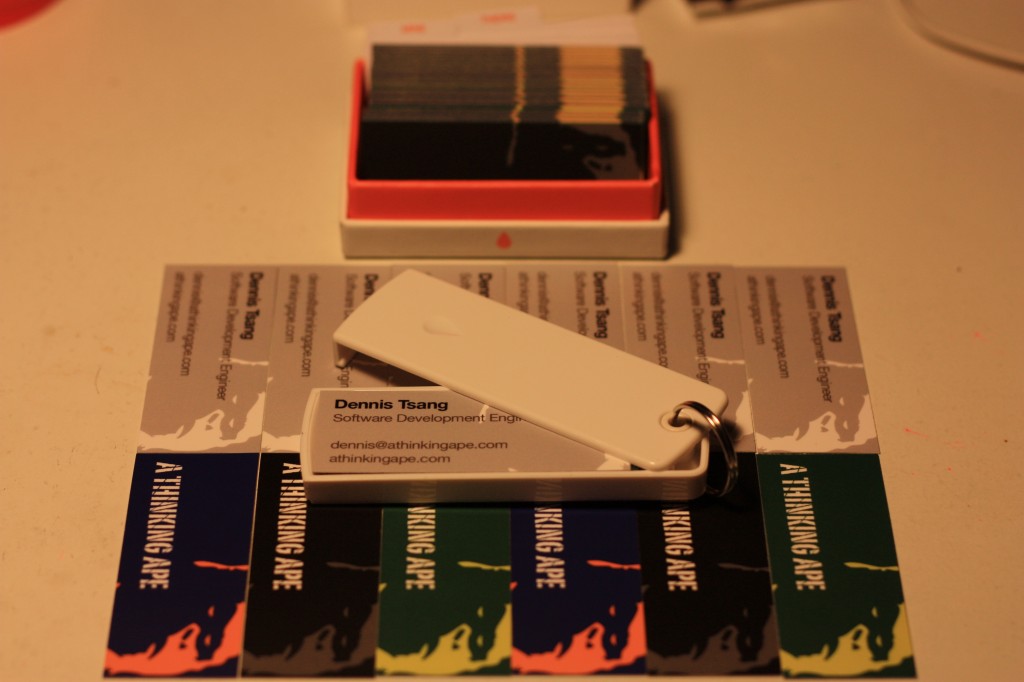 In case you were wondering what was in the “Yay!” package, it is a card holder.  To tell you the truth, I opened that one first because “Yay!” just sounded so exciting.

And here’s a glimpse of what it’s like at work: