Yesterday when I got home from work, I was excited to find my Compass card waiting for me in my mailbox!

Compass is TransLink’s new electronic fare card that will be rolled out in Metro Vancouver this fall. Earlier this year, fare gates were installed in most SkyTrain station entrances, and Compass readers installed on buses. TransLink is running a “beta test” of the Compass system with 10,000 volunteers from September 9th to October 1st (testing before launch is definitely a good idea!).

The Compass card uses NFC to communicate with the card readers. There’s a small microchip and an antenna embedded inside the card. I was curious to see what technology was behind this. I’m glad my BlackBerry 9900 has NFC built in, so I got Eclipse up and running with the BlackBerry development plugin and proceeded to code up a test program to see what I could find out about the chip.

I learned that the chip inside the Compass is a MIFARE DESFire EV1 with 4KB of memory. This wasn’t really a surprise as it’s the same chip in the Oyster cards (London), which are also by the same company, Cubic Transportation Systems.  It would be cool to see what kind of information is stored on the card itself and whether it is publicly readable or encrypted.

Beta testing starts in just over a week. I can’t wait to start tapping this Compass card. 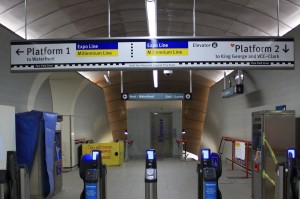